Posted on March 6, 2019 by CFOI in Articles, News | Comments Off on London councils’ FOI performance assessed

A new report by the Campaign for Freedom of Information reveals that some London councils are failing to comply with the Freedom of Information (FOI) Act’s time limits in as many as 40% of the requests they receive, causing long delays before information is released. On the other hand some are close to answering 100% of requests on time. The Information Commissioner (IC), who enforces the FOI Act, expects authorities to answer at least 90% of requests on time. The report finds that 25 out of 34 London councils surveyed fell short of this target in 2017/18. The scale of this problem had previously been obscured by the fact that many of the underperforming councils publish no statistics on their handling of requests. 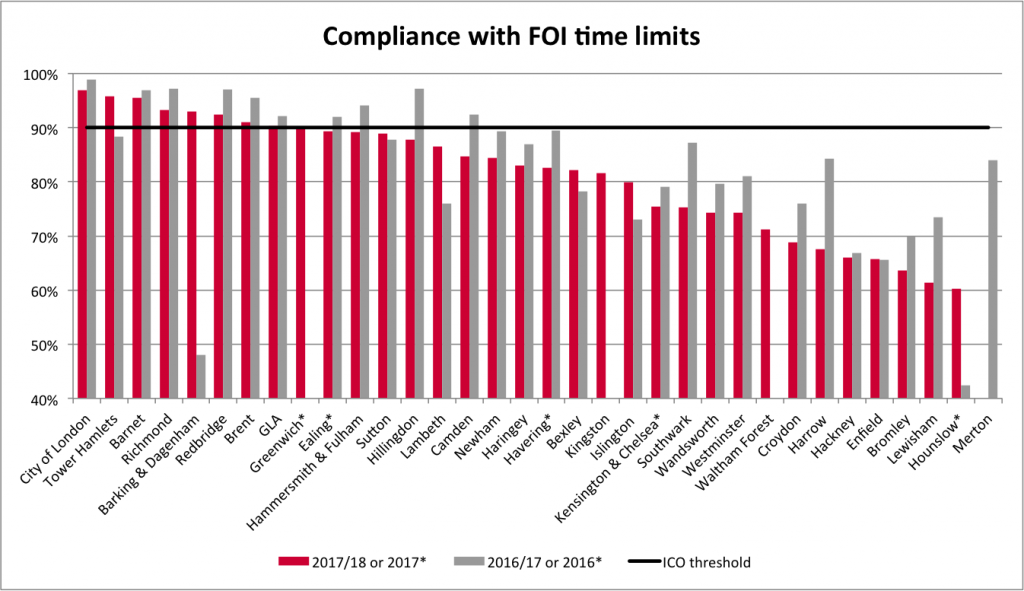 The report (FOI Good Practice: A survey of London local authorities) also reveals that some councils have special procedures for handling requests likely to attract unwelcome publicity, which are a cause for concern, and identifies errors in some councils’ internal guidance which could lead to requests being wrongly refused.

Some councils have been able to improve their performance by using software which tracks requests and warns of approaching deadlines, by monitoring their own performance and by making previously disclosed information available on their websites, so that the wider public not just the requester can use it. Barnet council says it deals with a third of all requests, and nearly three quarters of those about business rates and parking, by referring requesters to previous FOI disclosures and to its published datasets. Despite the opportunities to reduce their own workload, two thirds of London councils don’t publish any of their disclosed information.

The Information Commissioner’s Office (ICO) has failed to keep up pressure for improvements on authorities which persistently breach legal deadlines. The ICO used to publicly name and monitor under-performing bodies. In 2010 it monitored a total of 33 authorities, including 7 London councils. But in 2016 and 2017 it monitored only 2 authorities each year across the whole country. Not a single authority was monitored in 2018. It has also failed to use its power to issue enforcement notices, which could require an authority to deal with all overdue requests by a set deadline. The ICO has both informal and powerful formal tools for addressing persistent delays by public authorities, but is currently using neither.

The report was funded by a grant from the charitable foundation Trust for London.