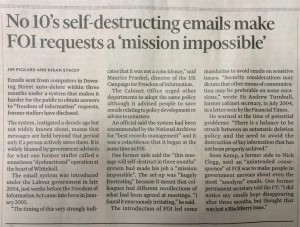 It was probably both.
END_OF_DOCUMENT_TOKEN_TO_BE_REPLACED

The Blair Memoirs and FOI

Posted on October 6, 2010 by CFOI in Articles | Comments Off on The Blair Memoirs and FOI

That Tony Blair regrets introducing the Freedom of Information Act has been known for some time. But the force with which he reproaches himself in his new autobiography for doing so is truly remarkable: END_OF_DOCUMENT_TOKEN_TO_BE_REPLACED

Chapter on the passage of the FOI Act

Posted on December 17, 2009 by CFOI in Publications | Comments Off on Chapter on the passage of the FOI Act

This chapter by Katherine Gundersen describes the passage of the FOI Act and early experience of its operation. It first appeared as part of as part of Unlocking Democracy: 20 years of Charter 88, published by Politico’s in December 2008.

Posted on May 8, 2006 by CFOI in Letters & evidence | Comments Off on Constitutional Affairs Select Committee evidence

The Campaign submitted written evidence to the Constitutional Affairs Committee’s inquiry Freedom of Information: one year on. A transcript of the Campaign’s oral evidence on 28 March 2006 is available here.

It’s Britain, so some doors are locked

Posted on December 31, 2005 by CFOI in Articles | Comments Off on It’s Britain, so some doors are locked

A version of this article by the Campaign’s director, Maurice Frankel, appeared in The Independent on 31 December 2005

The Freedom of Information Act has begun to open doors – but is yet to be fully tested against those the government is determined to keep locked.

END_OF_DOCUMENT_TOKEN_TO_BE_REPLACED

The Right to Know – five new rights come into force

Posted on December 31, 2004 by CFOI in Press releases | Comments Off on The Right to Know – five new rights come into force

END_OF_DOCUMENT_TOKEN_TO_BE_REPLACED

Don’t be afraid: open the files

Posted on December 14, 2004 by CFOI in Articles | Comments Off on Don’t be afraid: open the files

Less than three weeks until the Freedom of Information Act comes into force. From January 1, the public will have new rights to peer into a public authority’s files and check how well it is doing its job. People who want to know why they aren’t getting the service they expect, are unhappy with a proposal, or want to satisfy themselves that the right decision was taken, will now be able to see the paperwork or emails for themselves.

END_OF_DOCUMENT_TOKEN_TO_BE_REPLACED

Your new rights to information

Posted on December 14, 2004 by CFOI in Articles | Comments Off on Your new rights to information

A version of this article by the Campaign’s director, Maurice Frankel, appeared in The Guardian on 14 December 2004

On January 1 the long-awaited Freedom of Information Act finally comes into force. The Act gives the public important new rights to the information held by public authorities. Worried about possible changes to your local school or hospital? The Act should allow you to see the evidence for them. Want to know whether the police are doing enough about burglaries? Use the legislation to probe their response times and clear-up rates. Unhappy about a regulatory body that never seems to do anything when people complain? Ask for their internal guidance on handling complaints and see their staff are doing what they’re supposed to do.

END_OF_DOCUMENT_TOKEN_TO_BE_REPLACED

Posted on November 29, 2004 by CFOI in Letters & evidence | Comments Off on Letter to Lord Falconer on the new edition of the FOI code of practice

The Campaign has expressed concern at a new edition of the code of practice issued by the government under section 45 of the FOI Act, which it says contravenes two ministerial commitments to Parliament. These deal with  the time limits for responding to requests and the circumstances in which authorities should accept information in confidence. The Campaign has written to Lord Falconer, the Secretary of State for Constitutional Affairs, asking him to amend the code so that it complies with these commitments.

Double blow to freedom of information

Posted on November 13, 2001 by CFOI in Press releases | Comments Off on Double blow to freedom of information

The government today delivered a double blow to freedom information. The 4 year delay in implementing the Freedom of Information Act, which the Lord Chancellor announced today was condemned as “totally unjustifiable” by the Campaign for Freedom of Information. The Campaign was also deeply critical of ministers’ decision to refuse to comply with an open government ruling by the Parliamentary Ombudsman, also announced today – the first time this has ever happened since the code’s introduction in 1994.