Posted on December 14, 2012 by Katherine Gundersen in News | Comments Off on Central government FOI performance Jul-Sept 2012

The quarterly FOI statistics for central government for the period July to September 2012 (quarter 3 2012) have been published. They show that the volume of requests to monitored bodies fell slightly – 2% less the equivalent period of 2011 and 1% less than the previous quarter of 2012. The executive summary notes:

Monitored bodies answered 87% requests within the statutory 20 working day deadline. For central government departments the figure was 85%. Departments answering less than 85% of requests within the Act’s timescales face being monitored by the ICO (see the ICO’s criteria). The last round of monitoring by the ICO was April-June 2011, but it has said the next list of authorities will be announced before the end of the year. 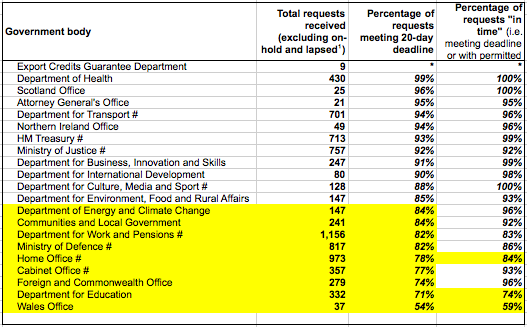 The latest bulletin also comments that the proportion of requests granted in full has slowly reduced since the Act’s introduction which it says “may reflect the changing nature of requests as the monitored bodies have made more routine information available to the public”.